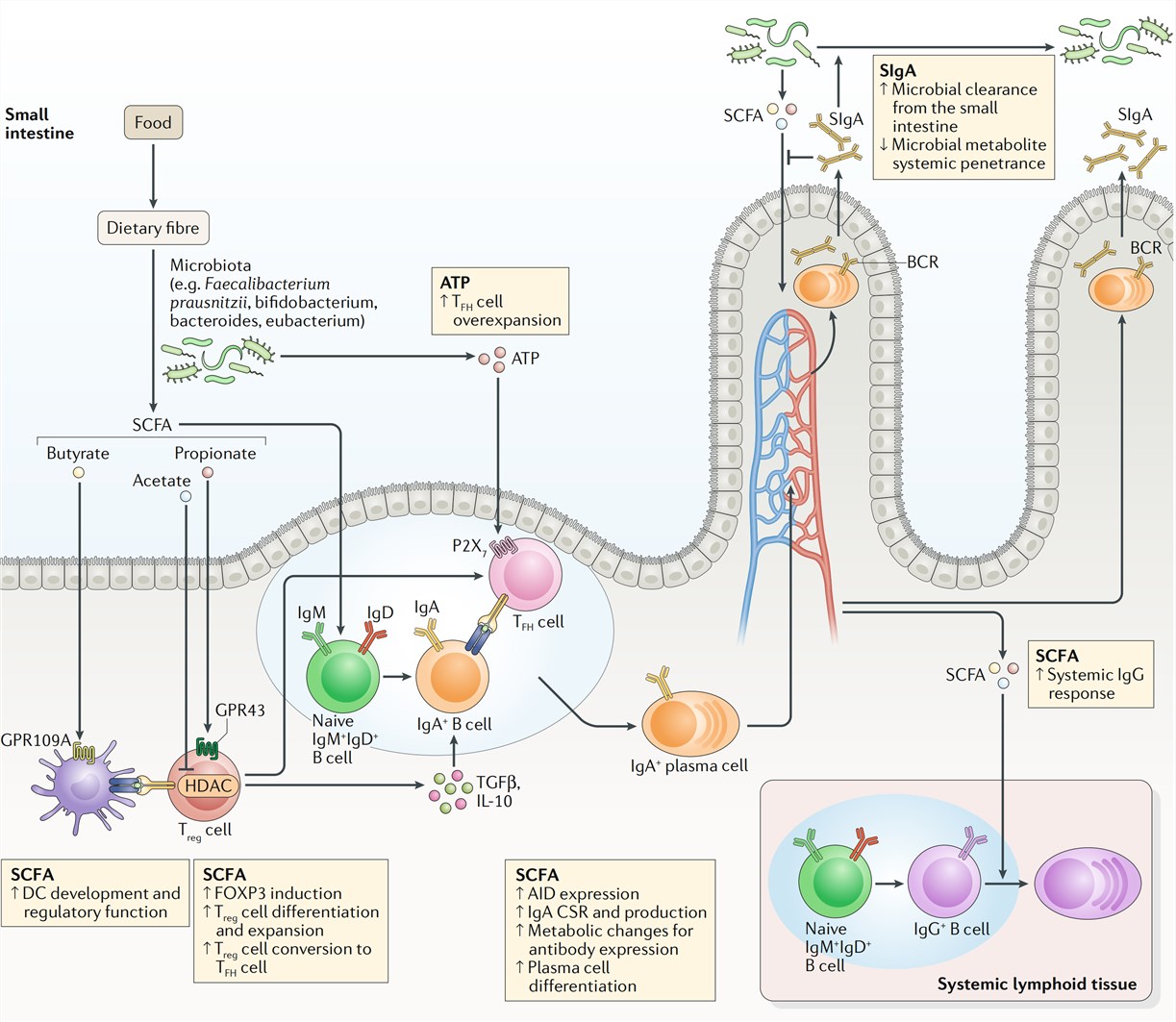 Although mostly known as a B cell antigen receptor, IgD also exists as a secreted antibody and, indeed, was first discovered in human sera. This IgD is released by IgM IgD+ plasma cells largely derived from mucosal B cells that have undergone IgM-to-IgD CSR. In humans, this process occurs in lymphoepithelial organs from the aerodigestive mucosa, including palatine and pharyngeal tonsils. In mice, IgM-to-IgD CSR has been detected in nasal-associated lymphoid tissue as well as in submandibular and mesenteric lymph nodes. Human IgM IgD+ plasma cells not only secrete IgD into the aerodigestive mucosa but also enter the circulation to seed the middle ear as well as the lachrymal, salivary and mammary glands. In diseases, IgD plays important role in hyper-IgD syndrome, autoimmune diseases, and multiple myeloma.

IgE antibody-induced inflammation is nearly synonymous with allergic disease, which affects one in five individuals worldwide. IgE is central to the mechanisms of immediate-type hypersensitivity reactions. These antibodies are also somewhat enigmatic given that a comprehensive understanding of IgE biology has yet to be established. IgE antibodies have gained significant attention as the incidence of allergic diseases has increased substantially. Atopic diseases are considered to be one of the principal manifestations of IgE-driven pathology. Allergen-specific IgE antibodies are bound to the surface of mast cells and basophils via Fc binding to the FceRI receptor. Allergen cross-linking of cell-bound IgE results in cellular degranulation and canonical symptoms of allergic inflammation. Immediate release of mediators causes rapid onset of vascular dilation and permeability, bronchoconstriction, leukocyte extravasation, and smooth muscle contraction. Cellular activation also results in synthetic processes which generate mediators of late-phase reactions. These processes result in clinical symptoms including potentially fatal anaphylaxis. Allergen-specific IgE can be utilized for diagnostics in allergy and is a target of therapies in asthma, environmental/food/venom allergies, and atopic dermatitis.

IgM is the most ancient member of our antibody family and the first antibody to appear during B cell ontogeny. IgM is also the first antibody released during a humoral response. Serum IgM forms pentamers associated with the joining chain and includes nonreactive IgM from conventional B cells, also termed B2 cells and polyreactive IgM from innate-like B1 cells. The latter IgM is readily detected in mice, but may also exist in humans. In general, IgM generates the first line of humoral defense against pathogens, but may also contribute to tissue homeostasis. Selective IgM deficiency, hyper IgM syndromes, and autoimmune disorders are all related to the IgM level of patients.

If you are interested in non-IgG antibodies or you have any other questions about our services, please don't hesitate to contact us for more information.