Immunoglobulins class M (IgM) is the most ancient phylogenetic class of antibodies common to all vertebrates starting from cartilaginous fish. Up to the year 2000, the only known Fc receptor for IgM was pIgR. Interaction of IgM with pIgR results in secretory IgM formation, whose functions are poorly studied. The receptor designated as Fcα/μR can bind IgM and IgA. It is expressed on lymphocytes, follicular dendritic cells, and macrophages. A receptor binding IgM only named FcμR has also been described. It is expressed on T and B lymphocytes.

It is a transmembrane protein with a molecular weight of 60 kDa expressed on T- and B- lymphocytes. Its gene is located in the same cluster 1q32.2 of chromosome 1, like genes of pIgR and Fcα/μR. Despite the resemblance between ligand-binding domains of all three receptors, FcμR is less similar to the other two. FcμR recognizes only IgM, while Fcα/μR pIgR and can bind both IgM and IgA.

It was established at the beginning of the 1980s that SC, being a part of sIgA and sIgM, is a fragment of membrane protein receptor (pIgR) that is incorporated in the structure of pIg during transfer across mucous membranes. pIgR is expressed on the basolateral surface of mucous epithelium and ducts of excretory glands. The highest level of pIgR expression is observed in small and large intestines. pIgR belongs to the Ig protein superfamily.

A receptor called Fcα/μR was found during screening of an expression library of a cultivated line of mouse lymphoma for products able to bind IgM. Fcα/μR is a protein of the Ig superfamily with a molecular weight of about 70 kDa. It contains more than 500 a.a. with four regions of potential glycosylation. Cells transfected with the Fcα/μR gene endocytose Staphylococcus aureus bacteria covered with IgM. Human Fcα/μR binds both IgM and IgA. The region of human Fcα/μR within the limits of a.a. 76-98 is homologous to the CDR1 region of pIgR and is predicted to be a part of a conservative ligand-binding site. 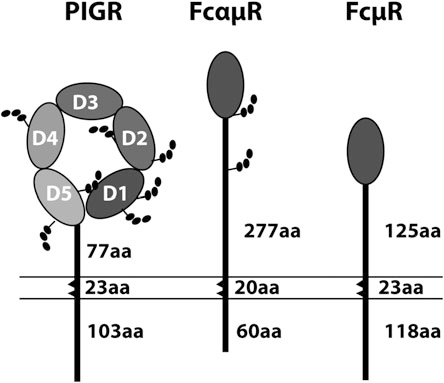 Fig.1 A schematic presentation of the three receptors for IgM: the PIGR, the Fcα/μR, and the FcμR. (Kubagawa, 2017)

A complex set of proteins interacting with the constant domains of the Igs. These molecules, named Fc receptors (FcRs), due to their interaction with the constant domain of the Igs, have many important functions in vertebrates including facilitating phagocytosis by opsonization, constituting key components in antibody-dependent cellular cytotoxicity as well as activating cells to release their granular content. All of these receptors are related in structure, where they all contain Ig-like domains.

Creative Biolabs is a biotechnology company dedicated to discovering, developing, and commercialising antibody medicines for devastating diseases. We have a world-leading team of antibody experts. Our goal is to efficiently design and produce our antibody products to address the problems that customers meet. If you are interested in our services, please feel free to contact us for more information.