IgE-related autoimmune diseases have always been the focus of scientific researchers. As an expert in the field of IgE and related diseases, Creative Biolabs has the ability to provide basic research products and services to customers around the world.

IgE is the last type of antibody discovered with the least amount. IgE signals through the high-affinity receptor FcεRI as well as the low-affinity receptor FcεRII. The main role of IgE on host defense is to trigger reactions to prevent parasites and the excretion of environmental substances. In recent years, with the advancement of technology, more and more new technologies for IgE detection and the appearance of protein expression libraries have greatly promoted the research of IgE autoantibody epidemic and antigen-specific diseases. IgE works through receptors on specific cells. After the receptor binds to IgE, subsequent cross-linking will lead to cell activation and the release of inflammatory mediators to further trigger advanced inflammation. Low-affinity receptors are related to IgE synthesis and antigen presentation.

There is increasing evidence to demonstrate that IgE is responsible for the occurrence of autoimmunity. Research on autoimmunity mediated by IgE autoantibodies is still in infancy. Studies indicated that erythematosus (SLE), chronic urticaria (CU), and bullous pemphigoid (BP) are most related to IgE autoantibodies. Evidence that other diseases such as rheumatoid arthritis (RA), asthma, autoimmune uveitis, and autoimmune pancreatitis are associated with autoimmunity is accumulating. 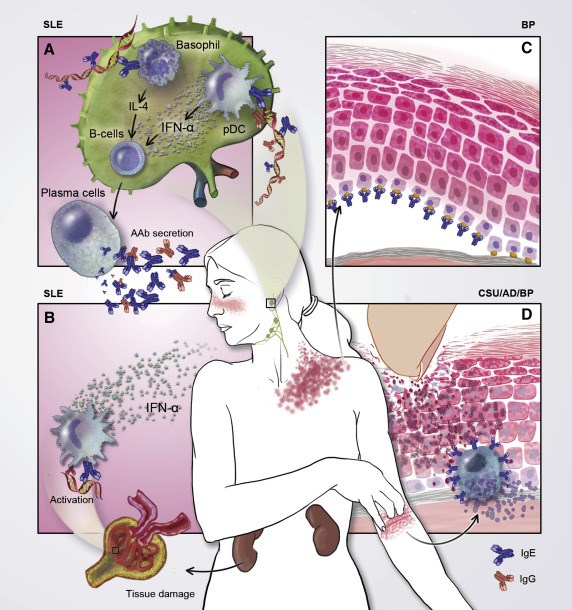 AD, also called atopic eczema, is a skin disease. In AD patients, many autoantigens can be detected, and IgE against themselves is very common. Some evidence suggests that IgE has a pathogenic effect on itself in AD. In addition, a significant association between AD patients' own IgE level and disease severity has been reported.

IgE is closely relevant to the pathogenesis of many autoimmune disorders. Therefore, the IgE-mediated immune pathway is a valuable target for intervention in autoimmune diseases. A recombinant humanized monoclonal antibody that binds to IgE has been approved for the therapy of allergic asthma and chronic spontaneous urticaria. Moreover, this monoclonal antibody has proven effective in the cure of allergic rhinitis, atopic dermatitis, physical urticaria, mast cell disease, food allergies and other allergic diseases. The most important thing is that combining this monoclonal antibody with conventional allergen immunotherapy can improve the therapeutic effect.