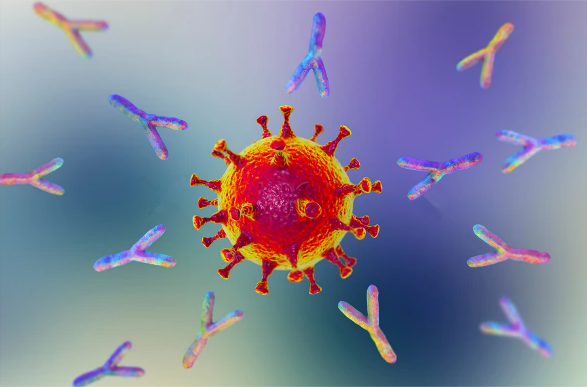 IgD, one of the immunoglobulins, was first identified in patients with multiple myeloma in 1965. It is low in serum (3-40 μg/mL) and accounts for about 0.25% of the total serum immunoglobulin. IgD is synthesized late in the ontogeny. The hinge region of IgD is long and is sensitive to protease hydrolysis, resulting in a short half-life of only 2.8 days. There are two types of IgD: serotype IgD (sIgD) and membrane-bound IgD (mIgD). It is now believed that sIgD can recognize soluble antigens to promote a protective humoral response, and mIgD constitutes B cell receptor (BCR), which is a sign of B cell development, differentiation and maturity. The discovery of IgD in ancient vertebrates suggests that it has been preserved during the evolution from fish to humans, and performs an important immune function.

IgD is considered a recently evolved class of antibodies, and it was only detected in primates, mice, rats, and dogs. With the increasing availability of animal genome sequences and the rapid development of gene identification tools, IgD and its homologs have been discovered in more mammals, as well as in cartilaginous fish, bony fish, frogs, and reptiles in the past 20 years. The most primitive of these species are cartilaginous fishes, which populated our planet about 500 million years ago when jawed vertebrates first appeared and the adaptive immune system first evolved. This means that IgD is an ancestral antibody that has remained in most jawed vertebrates throughout evolution. Thus, IgD should perform some important undiscovered immune functions that confer specific survival advantages on the host.

IgD is a glycoprotein with a molecular weight of 184 kDa. It is composed of two light (L) chains and two heavy (H) chains. The heavy chain and the light chain are connected by disulfide bonds, forming a conformation similar to the shape of the letter Y. The heavy chain of IgD is a δ chain, and the light chain is a κ or λ chain. Both the light chain and the heavy chain contain variable and constant regions. Among all types of immunoglobulins, the hinge region of IgD is the longest and it is vulnerable to enzyme attack, so IgD has a shorter half-life. The arrangement order of heavy chain and light chain variable regions is highly variable, called the complementarity determining region (CDR). While the amino acid composition and arrangement order of the non-CDR region is relatively unchangeable, called the framework region (FR). 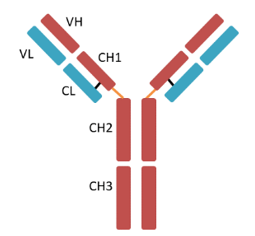 Five types of antibodies named IgM, IgD, IgG, IgA and IgE exist in humans and mice. While the function of IgM, IgG, IgA and IgE is relatively well known, the function of IgD has remained obscure since the discovery of IgD in 1965. IgD has structural diversity throughout the evolution of vertebrates because it is a structurally flexible locus that can complement the functions of IgM. mIgD and mIgM have the same antigen-binding site, and the expression ratio of both may be high or low. They can also control the activation and inhibition of B cells, and are related to the induction of B cell tolerance, so IgD may play a modulatory role in autoimmunity, and it works by acting on the corresponding receptors (FcδR and IgD-BCR).

Studies have found that the class conversion from IgM to IgD occurs in the mucosa of the human upper respiratory tract, producing IgD-secreting B cells that are highly responsive to respiratory pathogens and their products. In addition to enhancing mucosal immunity, IgD-converted B cells enter the circulatory system to arm basophil and other immune cells. IgD cross-linking on basophil stimulates the release of pro-inflammatory and antimicrobial mediators. In autoinflammatory diseases, the dysregulation of this pathway indicates that IgD coordinates the monitoring system at the interface between immunity and inflammation. In addition, sIgD can recognize soluble antigens, such as food allergens, and can reduce its immunogenicity by promoting protective humoral responses, inhibiting IgE-mediated mast cells and basophil degranulation.