In human, the content of IgA in serum is second only to IgG, accounting for 10-20% of the total immunoglobulins, and has a unique role in mediating immunity. IgA is a polyvalent antibody, which is abundant in mucosal secretions. As the first line of defense against infection, IgA is the main defense mechanism for mucosal infections. Secretory IgA functions to prevent foreign substances from entering the circulatory system, rather than to destroy antigens.

The monomeric structural unit of IgA comprises two identical heavy chains and two identical light chains arranged into two Fab regions and an Fc region, separated by a flexible hinge region. The heavy and light chains fold up into globular domains. IgA mainly exists in the form of dimers in secretions, and sIgA is formed by the polymerization of two or more IgA monomers. A typical sIgA is mainly composed of two IgA monomers, a J chain, and a secretory component. The secretory component is a 75 kDa polypeptide chain synthesized by intestinal epithelial cells, which acts as a dimer IgA-specific receptor for binding to the dimer form of IgA. The total molecular weight of IgA antibodies is approximately 160 kDa. 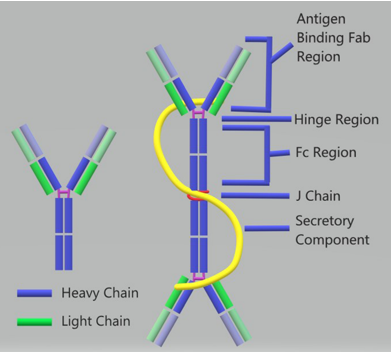 Fig. 1 The structure of IgA in its monomeric form and dimeric form. (Odineal, 2020)

There are two isotypes of IgA, IgA1 and IgA2, both of which are highly glycosylated proteins. The proportion of IgA1 and IgA2 secretory cells in different lymphoid tissues is different

According to the location of IgA, it can be divided into two types: serum IgA and secretory IgA.

IgA is the first line of defense against infection by inhibiting the adhesion of bacteria and viruses to epithelial cells, and neutralizing bacterial toxins and viruses both extracellular and intracellular. The application of IgA including the followings: